Perhaps the best example of the use of the word gospel comes from MartinLloyd Jones. He says that when a king went to war and lost, he would immediately send generals throughout the cities and villages to prepare the common people for war. Because the battle had been lost, the enemy would advance to take the people captive, and if anyone wanted to live they were going to need to fight for their lives. Their livelihood, their hope, their future was, essentially, in their own hands. On the other hand, Lloyd Jones says, when the king won a great victory on the front lines, he would send “gospelisers” or “good-news messengers” (literally, evangelists!) to proclaim the victory throughout the cities and villages of the Empire. These men were not generals telling the people to prepare for battle; rather, they were simply messengers, carrying a “gospel” message that the livelihood, hope, and future of the people had been secured on their behalf by the king, though they themselves had not lifted a finger!

Lloyd Jones says that every religion sends generals; in other words, every religion is a system of belief and practice that promises eternal blessing, nirvana, or enlightenment to the degree that you are willing to believe, obey, and perform. In religion, you are given a set of instructions, a list of practices, or a methodology of reform, and it is all up to you to make it happen. 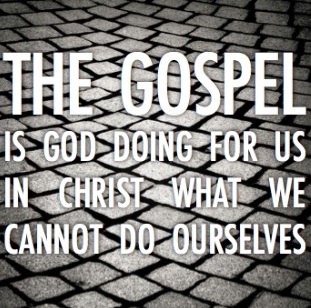 Gospel Christianity, on the other hand, sends messengers – evangelists – who proclaim that the victory has already been won by the king on behalf of his people. Though the people themselves have not gone to battle, they reap the rewards of the king’s risk, courage, and skill. Gospel Christianity is not advice, information, or a set of practices or doctrines that you need to adhere to in order to earn eternal life. Gospel Christianity is the announcement of a victory won on your behalf by King Jesus, which you have only to receive, believe, and celebrate!

The gospel is the center of everything we are and do, and could be summed up like this: Through the person and work of Jesus Christ, God fully accomplishes salvation for us, rescuing us from judgment for sin into joyful fellowship with him, and then restores the creation in which we can enjoy our new life together with him forever!

The gospel is not just the ABC of Christianity, but the A to Z. It is the way in which we are to live every day of our life. The reason why so many Christians fail to experience ongoing transformation is because they have forgotten what God has done for us in the Gospel (2 Peter 1:3-9).